They sit cross-legged in the grass. The sun reflects on the dew in the community garden, highlighting Durga’s contagious smile. She sits in a bright green kameez with a dupatta draped around her head, binding her midnight silk hair. Her husband, Phauda, sits beside her, twirling blades of grass. Durga’s laugh lines deepen as she grins, sharing about her beloved homeland, Bhutan.

“I love to garden. Our land was big. We had animals, cows, and big garden. My parents were farmers too.”

Durga repositions her ebony braid over her shoulder. Every strand is an act of rebellion: the ethnic Nepali Bhutanese were stripped of the right to wear their native clothing, language, and long hair as the Bhutanese government forced cultural assimilation. Durga refused to cut her tresses. Through sunshine and hardship, she had kept it, a beacon of her Nepali heritage and her journey to freedom.

The first Nepali residents in Bhutan go back to the 1600s, when the Bhutanese brought them over to work on temples, roads, and other developments.  The Nepali residents settled in the rich green south of Bhutan where the farms became the primary food source for Bhutan. In 1958, many Nepali Bhutanese were finally given citizenship and rights through the Nationality law of Bhutan. Even though they were officially Bhutanese residents, they held onto their rich Nepali Hindu roots. As their numbers grew and leadership shifted, the Bhutanese government grew increasingly concerned, fearing that the dual culture threatened their national unity. In 1980, the government developed the “One Nation, One People” policy. Under this law, those who could not prove tax payment before 1958 had their citizenship revoked.

It was a thinly-veiled trick. Since most Nepali were not granted citizenship until 1958, they had no tax record prior to that year. This made it easy for the government to revoke their longstanding citizenship and brand them as illegal immigrants.

Phauda looks up, his voice cracking as sadness creases his brow, and he says, “Bhutan government was opposed to the southern Bhutanese. The Nepali language was banned. The clothing was banned. The culture was banned. Books were banned. The women had to cut their hair.” Durga nods, subconsciously combing her fingers through the end of her braid.

Tensions rose as the Nepali people were denied education and jobs. Protests began to break out. The government responded with ransacked villages, imprisonment, torture, rape, and often death for the Nepali people. “The government was angry,” laments Phauda. “They came with the army and police. We just want our culture. We had to hide. Some people go to the jail; [police] are hitting, and many people they killing.”

Thirty-five-year-old Durga walked with her husband and three children, meager packs slung across their backs, as government officials marched them off their land. As she pivoted to look back at the only home she had ever known, her foot sunk in soil that her community had routinely tilled and harvested through the years. Tears fragmented the last image she would ever see of her homestead. Wisps of hair, escaped from her rebellious braid, caught on her hand as she wiped at her tears, and she watched her home shrink into the hills.

Withered and broken, they arrived at a refugee camp, first in Beldangi and then in Khudunabari, Jhapa Nepal with their three young children. Though they were culturally Nepali, they were not given the option of obtaining citizenship in Nepal. Some held on to hope that Bhutan would let them back into their home, but that hope proved futile, replaced by malnutrition, disease, and crime.

“Every aspect of life was hard living in refugee camp. Life was very challenging. Full of difficulties,” says Durga, her mouth drooping where the lines on her skin once showed a smile. A camp is where she raised her children—where she taught them to hope, to dream, to work hard, and never give up; where she saw them marry and dream of a bigger life than what they knew.

For 20 years, Durga’s feet rushed to the same faucet shared by 300 people before their allotted access time was up, carrying clean water to her family. With their weary hands, Phauda and Durga patched up the home of bamboo and plastic, protecting their hut from flooding as best they could. Each person was allotted five kilograms of rice for 15 days, vegetable oil, sugar, salt, and some vegetables.  At night, women and children were especially vulnerable, as rape, crime, and abuse were common. Substance abuse also occurred as people tried to drown their strife, entering a cycle with no future. Though Durga and Phauda were able to open a small shop to support their family, the physical and emotional poverty left more than empty stomachs. By 2007, 20 years after they arrived, more than 13,000 people were packed in the Khudunabari refugee camp, still wandering aimlessly in their brokenness wrought by their cultural genocide. Over 100,000 Nepali Bhutanese had been displaced.

In 2007, the UNHCR began resettling Bhutanese refugees. Durga and her family were informed that they would be relocated to Kent, Washington, in America.

Recalling this news with a bittersweet air, she says, “It was our only option. That time was very hard. Because I could not speak the English and could not understand.” Adding English to the strand of languages she already knew seemed a daunting task at her age. While she was overjoyed to find a place where her children and grandchildren could put down roots, receive health care, and work towards earning citizenship, fear gripped her at the thought of settling in a foreign country.

The bustle of the airport still rung in her ears as she followed her son through SeaTac airport with her family. Her head pounded from the overload of information being dumped on her. The shock of cold Washington air felt like knives on her skin. She held her braid to her chest, finding her familiar strands of strength. The next few days were a fog of confusion learning to adjust to running water, refrigerators, job applications, and paperwork.

Some days Durga awoke with a heavy heart, invisible strings pulling her to a home thousands of miles away. She could never return. Now she utters, “I felt lost, misled. Away from my friends and relatives. Hardest part was language and navigation.” Learning English and familiarizing herself with the land helped Durga feel a sense of belonging, but it was the community around her that made the greatest difference. Durga joined the community garden group through World Relief, where she was given a garden to nurture and grow. It felt good to dip her hands in the moist soil again and create life beyond her own. With a net of community around them to turn to, Durga, Phauda, and their family began to sprout hope that they could make America their home. Beaming with a giddy laughter, she announced, “I went to a citizen class… We all family get citizenship in 2016!” Pride radiated from her for her family and their perseverance through the trials they had gone through. 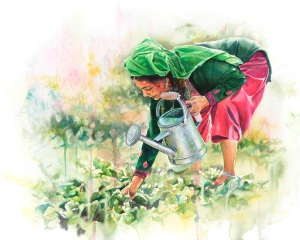 Durga’s depression upon initial resettlement is not uncommon. Thousands of refugees relocate each year, and though they are safe and thankful for refuge, it is not home—at least not right away. Resettling into another culture is difficult enough, let alone trying to do so when you are older with little to no income, no support system, psychological symptoms from past trauma, and medical struggles from lack of proper health care over the years. An invitation for a fresh start does not always guarantee success, particularly for the elderly. Many battle with depression, shaped from decades of displacement and a loss of cultural and personal identity, mounted by physical and emotional isolation of living in a foreign land with limited mobility. Suicide has become increasingly prevalent among refugees as the number of displaced people has reached the highest number ever recorded worldwide. Depression and suicide rates are particularly high for Bhutanese refugees because of the time spent in refugee camps, and again increases dramatically for the elderly. Creating a net of community and relationships is imperative to a refugee’s mental, emotional, social, and physical health. NGOs like World Relief practice holistic healing, creating programs such as cultural companions to help refugees and asylees navigate everyday life upon their arrival and community gardens where refugees can congregate with other refugees to grow community and access familiar food to consume.

Durga and Phauda sit beside their garden in the scant shade of a small tree as they tell their story. It has been seven years since their arrival in the US. Though there are hard days, they have found joy where they were planted once again.

Durga murmurs with thankfulness for the health care provided to them. “Two years ago, Phauda [had] open heart surgery.” The problem had started 11 years ago, and now he was finally able to get treatment. They spend their days teaching their grandchildren how they used to farm in Bhutan, and about their cultural heritage. “They are light,” Durga says, smiling wistfully. She loves to pick marigolds with them, her favorite flower. She looks forward to teaching her granddaughters to braid their hair—hair they will never have to cut.

Award winning artist Karisa Keasey has been using her paintings to promote social justice and amplify the voices of some of the most marginalized people in the world for more than seven years. Recently she came out with her book “When You Can’t Go Home,” which follows the lives of 10 refugees whose stories are set alongside 30 of her watercolor portraits. In addition to raising awareness about refugees, Karisa donates 50% of the pr

ofit from each book to World Relief so they can continue their work in refugee resettlement. Karisa lives in the greater Seattle area, where she paints and speaks full time. See more at karisakeasey.com.