Jacob wrestled with God. I have no idea why. I have no idea how. I just know that he did. I know because I too wrestle with God. I’m wrestling now. Confounded by the parasitic terrorist of a germ threatening my normalcy and yours.

So I walk to the water to make sense of it all. Tide rushing out then inching back in again. Always going out and coming back. Rush and pull back. Pace. Rhythm. Pattern. Like kneaded bread pushed and released. Sorrow then joy. Turmoil then peace.

When the status of the world is uncertain, I go to the water to listen and remember that this too shall pass, though I cannot see it now. Things calm and go.

We had one day of training and suddenly there were rows of them, little Brady Bunch boxed faces who used to huddle and harangue and harried hurry into class just before the bell staring blankly back at me via a screen. Sprawling photos were alive like the gallery at Hogwarts. They waited for me to say something, something that might change the course of their new history, or at least something slightly profound. I froze thinking of the status of the world.

We all had plans. This was not one of them. Somehow we’ve kept on without fail. I wondered what all of those Contagion-type movies got wrong. It’s this. It’s the gathering and regrouping that they forget to show in films. They focus on the crazy, the sad, the fear screaming over crowds. They miss the singing and smiling from a distance, the churches continuing online or providing “drive-through” prayer. The roommate making plans for yoga Monday and Toga Tuesday. It’s the banding and bonding together, making moments last. It’s the sweet woman who waved to me on the beach where I was collecting shells so I could catch the last of the sungold on the mountain peaks before it set.

We all rise to the occasion. We are the tide. It’s pretty impressive.

The teenage faces stared back at me through the looking glass that first day. I breathed in slowly, deeply, closed my eyes, opened them again. I looked into the camera and… burst out laughing.

“This is so weird,” I exclaimed! And that was that. Silence broken, they started laughing and talking all at once just like they do in my classroom. It was live and alive all over again, just in a new way.

I’ll admit I’m terrible with change. I cry. But when this one surprised me, the challenge became a welcome distraction.

And, I cannot help but imagine that at one point, mid-match, just when Jacob sensed an advantage, I think he caught a glimpse of something there in the eyes of God. Eternity? The answers to all “whys”? We will never know, but I bet that just then, well, I bet they laughed. 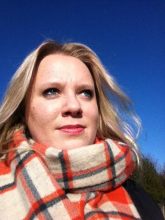 Stephanie Platter is a teacher, writer, & film critic, who is revived by the gold glimpses of sunset just like Superman, and she will admit that coffee is her kryptonite.