All photos belong to Matthew W. Kennelly and may not be reproduced without permission.

As we walked the field webbed by early century water lines, I noticed in moments of stress, he’d lift his hat with a hand on his head, favor a leg, and take a deep breath. I used to wait, like a kid who lit a firework, for the explosion. But, the explosion never came and I don’t expect it to anymore. We continued on, walking the field he grew up walking with his grandfather. I asked him how he doesn’t lose his composure after a day full of broken-down machines, avoidable mistakes made by employees, and the inevitable obstacles farming presents. With one foot in the conversation and the other checking sprinkler heads, he responded, “You know, I swore a lot!” he joked. “It just doesn’t do any good losing it. It doesn’t fix the engine, you know? You just gotta keep moving forward.” That last part has been ringing in my ears since he said it. “You just gotta keep moving forward.”

I first met Andrew Albert, a 34-year-old Arlington, Washington crop farmer, in April 2017 while visiting his farm to photograph a family. His presence struck me instantly. Have you ever had the experience where the fibers of your soul’s fabric cry out, “This matters!”? It’s an unexplainable, cosmic-like order you could hardly disobey if you tried. I only spoke to Andrew intermittently before heading home. For the next seven days, I couldn’t shake the idea of documenting his farm. I sent a nerve-ridden email asking if he’d be willing to let me follow him on the hip for the indefinite future in hopes to better understand what he does. He replied fifteen minutes later with an ecstatic yes.

I started “In The Blood” without much reason at all but to document the process of my learning about farming. I’ve had stretches of intention to make it an educational commentary for those like myself who live less than 50 miles away from a farm yet know nothing about them. I didn’t know that hay was grass and straw was wheat, I didn’t know farming was not a job but a life, I didn’t know that less than one percent of our population is involved in agriculture, and I didn’t want to know that my tax dollars have been used, illegally, to fund anti-farming lobbying campaigns fueled by false information. So the more time I spent with Andrew walking fields, riding shotgun in the tractors, and tagging along on the most menial of errands, my desire settled into both introducing my urban audience to their misunderstood, rural neighbor, and myself to my own heart’s condition.

Like a seed laid in dirt neglected of the processes of manuring, discing, cultivating, mulching, fertilizing, and so on; so was my heart by an old mentor of mine. I was sixteen years young and susceptible, subject to his carelessness toward the soil’s condition. By no surprise to even the average farmer, I didn’t germinate as a seed properly nurtured would. I left that relationship crooked and wounded relationally. I decided I would trust no one in their offerings of help. I feared the hands of authority beyond just those of this world. But soon after beginning “In The Blood,” it became apparent to what I had got myself into… a farmer’s hands.

Andrew’s Uncle Max says, “You can’t be a farmer unless you’re a hopeless optimist.” He’s right. There is an amount of grace, patience, and hope required in farming I have found nowhere else or have attained myself. So many days of waiting on weather paired with repairing mechanical issues the same as the day before, the common man would go mad. But I soon began to notice I could only involve myself in this story for so long before my heart would cling to its rhythms and beat at its tempo. Andrew accepted me as one of his own, letting me witness the dynamics of his daily routines and the intricacies of running a farm. 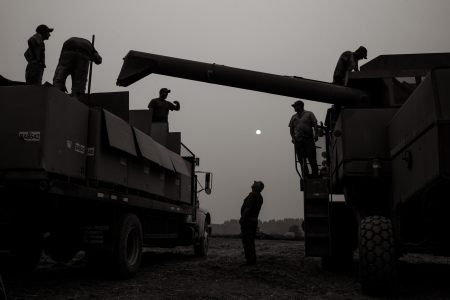 I remember, very clearly, one day when all seemed to go wrong. Call after call, text after text, Andrew was bombarded with the reminder that no matter how hard you work, how long you work, how well you work, things will go wrong. I’d witness the clenching of his jaw before he’d swallow what could have been an exhale of poisonous rage and say, “Alright! Back to the farm.”

That night, dealing with my own operations at home, I backed into my fence built in the ’60s. With a quick tap from my bumper, half of the 50-foot fence crumbled like a gingerbread house. It was dark, I was tired, and the last thing I wanted to do was fix a fence. But as soon as I was faced with the choice to wallow, I thought of Andrew. “Take a breath,” I thought. I sat in my car, took a breath, and decided to rebuild the fence better than it had initially been built.

This is all that “In The Blood” is for—the idea that farming is about much more than where our food comes from. It’s where humans meet earth to dance to nature’s song. Full of grace in the tension, patience in the rush, and hope in the despair, we are all farmers of one thing or another.

Matthew W. Kennelly is a teller of intimate details by viewfinder and pen. For the foreseeable future, his time will be spent telling stories of farmers and rescued horses when not in the company of his family, friends, and dog. He anticipates a young death with his final words being, “There is always hope. Always.”

Matthew’s photo of the Wolverine wildfires appeared as the cover image for Kindred’s September 2017 issue. His documentary photography can be found at www.fortvanity.com.