T. West is third from the left, in the questionable black wig. Photo by Davey Oil.

When I sat down to write this article, I could not think of a single new thing in my life. Same job, same house, same brand of coffee (Major Dickason, you delicious, brooding devil, you). Luckily, a quick perusal of my recent photos quickly reminded me of a ginormous, 90,000-person new thing that I just did one week ago.

Not the Comic Con. Lord knows I don’t have that kind of money. Emerald City Comic Con, up in my pacific northwestern neck of the (literal) woods. Even compared to the King of Cons, it’s nothing to sneeze at. ECCC sells out every year, taking up the entire 415,000-square-foot Washington State Convention Center. It was my first time going, and I had a free four-day pro pass under my authorial identity. I had vague cosplay costumes planned for three of the days, but wanted to show up the first day in street clothes to soothe my rabid social anxiety. Ain’t nothing that’ll trigger your fight-or-flight quite like dressing up in skin-tight spandex in front of 90,000 potentially-judgmental strangers.

Luckily, I had some friends who are old conners, and they showed me the ropes. But my lovely tour guides had their own agenda, and I couldn’t be their third wheel every minute of the day. I branched out on my own, attending panels, perusing artist booths and writer tables and merch displays until I was literally limping, my body unused to prolonged physical exertion, even if said exertion was nothing more than walking at a slow and leisurely pace.

While I had an amazing time, I can’t pretend it was perfect. Attending an event of that scale on my own was overwhelming. On Saturday, the most crowded day by far, I ended up retreating home hours before the con closed its doors, depressed and anxious. I hadn’t been able to hang out with my friends the entire day, and my Starbuck cosplay from Battlestar Galactica was seriously half-assed compared to the full-fledged Thanos costumes and officially-licensed Kylo Ren regalia the serious cosplayers sported. Over the course of six hours, only one person recognized the character I was supposed to be dressed as. I was on a tight budget, and didn’t feel brave enough to linger at any one booth too long, afraid the owner would try and sell me something I couldn’t possibly afford. I was upset, oddly and deeply, standing between hundreds of aisles of my favorite things, trying not to cry. I had failed, somehow, at having fun, and thought about staying home the last day, huddled in blankets and sweatpants watching Friends on Netflix, wallowing in my own social ineptitude.

The weekend, however, was not lost. A friend of mine had invited me to a Facebook group of local RPGers (Role Playing Gamers), mostly folks who played D&D (Dungeons & Dragons). While I hadn’t yet played a game with anyone, I’d interacted with a DM (Dungeon Master) who told me he was hosting an intro D&D game at the convention. I’d missed the first two days doing other events, but the last game he was hosting was Sunday morning, as soon as the doors opened. Rallying the last shreds of my dignity, I put on one last costume and got my butt downtown fifteen minutes before the doors opened, knowing if I showed up late to the table, I’d never have the courage to introduce myself to a group of complete strangers.

Luckily, I knew what the DM, Davey, was supposed to look like, and after shyly asking the ECCC staff where I was supposed to go, I found him, like a beautiful, nerdy lighthouse in the invisible storm of my anxiety. He recognized me, too, and we shook hands, and I sat down, and the other players at the table were extremely nice people and we chatted and EVERYTHING WAS FINE. I’d never played a game of D&D in my life, but the whole table walked me through what my character sheet meant, what the dice were for (and when to roll them—I was a 20 fiend), and we successfully completed our campaign. I, as a lady wizard elf, had the highest perception in the group and discovered every trap the smugglers laid for us, except, of course, the very last one which almost killed us all. Luckily, the other members of our troupe saved the day, and I left with a bag of gold coins and a dinosaur egg.

At the end of the campaign, I shook everyone’s hand, asked a few more questions about how to port my character over to another game, and left, on a weird, personal-victory high. I’d done it. I’d done a silly, small, terrifying thing. I’d met strangers, and played a game I didn’t know how to play. I’d followed through on a social plan that I had made, instead of bailing and staying home. Like Selene at the end of Underworld, I, too, was a new creature, reborn in the blood of nerddom.

The rest of the day was a beautiful blur. I caught up with my friends, saw a few more panels, got my father his first game of Settlers of Catan, and bought my first set of dice. While I in no way “conquered” my social anxiety, I did give it a big middle finger just by showing up every day. And while I may not dress up next year, knowing now that I prefer the comfortable anonymity of jeans and Princess Bride t-shirts, I will go again, and I’ll be that much less afraid to dive into the new and wonderful.

Temple West is the author of the YA book Velvet and its sequel Cashmere.  Armed with a very shiny English degree, she spent four months in Oxford holed up at the Radcliffe Camera amongst the hush of ancient books and the rich musk of academia. Returning to Los Angeles, she acquired a concurrent degree in film, mostly as an excuse to write essays about The Princess Bride and Hook. She can sew (poorly), drive stick (please fasten your seatbelt), and mostly lift her feet off the ground while stuttering into first gear on a very small motorcycle. She currently lives in Seattle and works as a cat wrangler project manager for a software development agency. 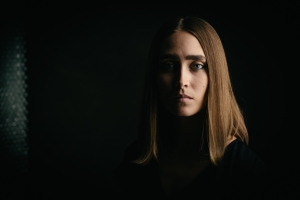