My great-grandfather, Clifford Staley, sporting his trademark pipe in his late 20's - early 30's examining a piece of gold ore from the Colorado mine.

“All that is gold does not glitter,
Not all those who wander are lost;
The old that is strong does not wither,
Deep roots are not reached by the frost.”
― J.R.R. Tolkien

I had seen this photograph of my grandmother riding a tractor in an album at my aunt’s house for years, and it had always been one of my favorites.  When I asked my aunt if she could send me a copy of it, she had no idea what I was talking about.  “You know, the one with grandma Doreen smiling on a tractor at the mine!” I said.  After some back and forth, we concluded that the photo I was talking about was indeed of my grandma, but there wasn’t a tractor.  Instead, she was manning the wheel of a makeshift car constructed out of wooden crates. I wondered if she and her brothers built it one summer day, and I imagined them dragging the wooden crates across the fields under the sunshine, surrounded by mountains, towering pine trees, piercing blue skies and pockets of wildflowers. Maybe her parents helped her, or perhaps she did it all on her own.  Her little eyes shine below her pageboy haircut, radiating the essence of childhood and the universal impact of an imagination.

Her mother, my great-grandmother, Jeanette Henderson, left Glasgow, Scotland when she was 17 years old to join her brother who had been living on the east coast of the United States.  She attended Drexel Institute (now University) and became a secretary. She worked at a boy’s school until she met my great-grandfather, Clifford Staley. His father, my great-great grandfather, James Bishop Staley, embodied the entrepreneurial spirit. He owned many enterprises in Indiana and New Jersey including an ice storage and delivery company.  They cut ice from the frozen lakes, stored it, and then transported the blocks to houses to keep the iceboxes cool. He also had mining interests in Colorado.

Great-grandma Jeanette after arriving from Scotland

In the early 1900’s, possibly following in his father’s footsteps and embracing Jeanette’s independent spirit, Clifford and Jeanette decided to head west from South Bend, Indiana to Caribou, Colorado in search of precious gold. They worked in others’ mines, until they were able to save up enough to purchase a mine of their own, the Keystone Gold Mine in Magnolia, CO.  The property consisted of the mine, reputed to have a vertical shaft over 400 feet deep, a preprocessing mill, and a miner’s cabin.

My grandma in front of her one-room schoolhouse

My grandmother, Glenna Doreen Staley, the bright eyed girl in her make-believe car, skinned deer and killed chickens at the age of five. She attended a one-room school house with her two brothers, and once a month she and her family would need to make the dusty and arduous journey to the nearest town of Boulder, CO for groceries and other supplies. This high mountain road had sheer drop-offs and severe switchbacks which they navigated by a wagon, led by a team of several strong mules.  The expedition was not made any easier by the huge loads of ore they needed to transport with only big wooden brakes to contend with the gravity.  According to an article published in Runner’s World by Brian Metzler, that stretch of road is now a highly sought after proving ground for elite runners from all over the world including Olympic medalists, world record-holders, NCAA champions, and big city marathon winners.  According to the article, “ “Mags,” as it is affectionately called by those who run it, is situated between 8,100 and 8,800 feet in the ideal altitude training zone that, if properly implemented, can greatly expand training effects and harden (or break) a runner’s resolve… It’s an inherently difficult road to run at any speed, but all the more so if you’re willing to match the intensity of the environment.”  Brian also quotes Peter Tanui, a former elite Kenyan road runner who trained in Colorado for most of his career. “Up there, it’s never easy” Peter says, “But if you can run strong up there, you can do it anywhere.”

Great-grandpa Clifford inside the mine

My grandma was raised amongst days of sweat, hustle, grit, and vigor where the strength it took to skillfully delve into the earth hoping to hit a good vein of gold ore was matched only by the strength you had to have to be there in first place.

My grit does not consist of skinning animals in order to have my next meal, but I like to think that I could if I had to. [Side note: I do often travel to the grocery store with two tired kids under the age of five who refuse to do anything besides push their own carts, won’t leave tearless unless we purchase candy or a Hotwheel, and always have a bathroom emergency right as our first item is being scanned. So, I suppose that takes grit of a different kind]. 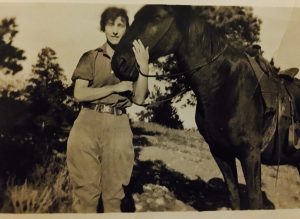 Great-grandma with her horse

I often feel paralyzed by choice, which I realize in and of itself is a statement of privilege. This overwhelming freedom of choice often brings with it a crushing wave of doubts.  We think, there is no way that I could ever _[fill in the blank]_.  And then, somehow, we do. We conquer things every day, big and small.  We come from a long line of people who could, and did, against all odds. We all exist because somewhere along that line, someone fought for us to be here. As a human race, we are constantly striving to get somewhere, even if it’s just to make it to another day.  I don’t think we can underestimate the power that comes to us when we draw upon where we came from, reflect on our roots, and realize what we are made of.

If I ever need a reminder, I will look at my daughter, Rubina Doreen. She has a resolve that is stronger that that vein of ore, and a spark that I think would make her namesake proud. She and her equally spirited brother are my gold, and I hope they can always see the simple magic and opportunity that can be discovered in a wooden crate. 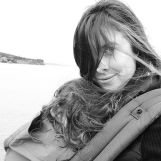 Marissa B. Niranjan is proud to come from a long line of strong, badass, women and she will never stop appreciating gold in all of its forms.

A link to Brian Metzler’s full article in Runner’s World can be found here.