I have whispered these words more times over the course of the past week than I have in my entire lifetime, and I am a birth doula, so that is saying a lot. In fact, I heard them so many times that they began to lose their meaning, but all I could do was keep saying them. When she was sleeping, when she was crying, when she was shaking, and when she was screaming. I wanted to make sure she didn’t only hear them when she was being stoic and repressing her sobs with ever fiber of her being.

When I parked my car in front of our house on that evening, I was happy. My husband and I sneaked out of work an hour early to grab a quick glass of wine before coming home to the beautiful intensity of a house filled with three young children and a dog. I had to stop by the store to pick up a few things for dinner on my way home and even treated myself to an expensive piece of cheese and fancy crackers, just because.

As I walked toward the house, I saw my mom barreling towards me, and I could tell by her face that something was wrong.  All she said was, “You need to go. Rubina fell of her bike. I think she may have lost her finger. You need to go now before they take her to the hospital.”  This was so outside of what I thought would come out of her mouth, and I could not accept it as a truth, so I just walked into the house and stood in the doorway. That is when she breathlessly shouted, “Marissa, this is not a joke, you need to go NOW.” It was that NOW that made everything register in my head. The flashing lights of a firetruck I saw one block up before I turned down our street, the smashed car being hauled on a flatbed (which thankfully was not related to her accident) that I yielded to a few blocks back. My brain sluggishly began to connect the dots that those lights were for my baby.

I dropped the bag of my expensive cheese and fancy crackers and ran. I felt like a cartoon character with the blurry legs, even though my whole body went completely numb. In the short distance it took me to get from our house to where the crash happened on the next block over, I became hyper-focused on other people walking on the sidewalk, nonchalantly enjoying their ice cream cones from the local ice cream shop just down the street. They were laughing and holding hands and soaking in the Seattle sunshine while I ran towards my greatest fear. They are so lucky, I thought.

I tore around the corner and saw the group of people gathered around the firetruck. My husband got there first, since he didn’t stop to buy cheese. I remember locking eyes with a woman who I would later learn was the first one to arrive at the scene and who held her close to her chest until the paramedics got there. I will never forget the look in that neighbor’s eyes. With just one stare mamma to mamma, and one deep breathe that she took in front of me, she silently told me it was going to be okay and that I needed to breathe for the sake of my daughter, so that is what I did. I am so grateful for people who can care for our children when we can’t be there.

It’s just a pinky I kept telling myself as I breathlessly gripped the steering wheel physically having to restrain myself from revving through every red light. It may just be a pinky, but it was the pinky that grew inside me, caressed by face while I nursed her at night, and helped calibrate her hand to smack her brothers when she had enough. It was a part of HER and now I saw eight of her neighborhood friends fanned out looking for it in a bush. It was more than my heart could comprehend. Later, phrases like ‘potential for bone infection’ and ‘possible nerve damage’ would make me feel a little more justified in my worry for the pinky.

When she nervously glanced down and saw the splint the doctors had crafted so we could transfer to a different hospital where she would have her surgery nearly twelve hours later, she turned to me with huge tears brimming her eyes and shaky bottom lip and said with the smallest and softest of voices, “Do I have to wear this for the rest of right now?” I opened my mouth to respond but then promptly closed it, because that was not how I expected her to finish that sentence. I was prepared for, “Do I have to wear this for the rest of my life” or “the rest of the summer” but not, “the rest of right now.” That is her specialty, throwing out pearls of wisdom in the most unexpected moments. Sometimes the bravest thing you can do is make the decision to take another breath. And then another one. And another. Until the rest of right now.

Waiting in the triage room of an emergency department in the middle of the city at one o’clock in the morning brings a lot of perspective. I felt like each code called over the speaker, every bloody bandage, every wail and expletive yelled over an injury or a broken system skewered into my heart until I just felt like a giant shish kabob of pain. Every operating room we got bumped from just meant there was a more pressing injury coming through. I kept thinking of a million ways things could be worse, but then I’d look down at my little girl’s face, glistening with sweat as the shock wore off, and couldn’t help but think a few ways that things could be better, and then I got mentally stuck somewhere in between those two places. Moments like these make you appreciate the resilience and fragility of life and the human spirit.

As I lay next to her at night now, I get flashbacks of seeing her little body laying in that hospital bed, begging me for water, and then refusing the doctor approved mouth-moistening sponges because she was told she couldn’t have ANY water, and she is a rule follower. I see her waking up every couple of hours and calling for me with that terrified and confused tinge to her voice rasped from her dry mouth. I see the girl who, even through her fear and pain, asked the doctors and nurses every single time they touched her, what they were doing and why. She had to know that why, but didn’t want too many details. I see her little eyes flutter closed as the anesthesiologist gave her her first dose of medicine in twelve hours, which “should be enough to make her sleepy to the point that we can wheel her away without us,” and then I see the surprised look on his face when those little eyes shot open at that statement followed by an “absolutely not.” “It looks like you are going to come back with us,” the doctor said, as they prepared to give her a bit more medicine. I can see the fluorescent hallway that seemed to narrow as we got closer to the room where a team of doctors and nurses would work their magic fueled by years and years of education and sleepless nights. I picture the relief on her face when the surgeon tells her that he was able to save her finger. I see her doing curls with the gallon milk jug as we wait in line at the grocery store and struggle determinedly to stay in the lines as she colors with her left hand, and I squeeze her just a little bit tighter in the comfort of her own bed as tears stream unconsciously down my face.

Yesterday, as I sat at a stoplight I noticed a little piece of paper that had slipped underneath the windshield wipers and became wedged underneath the hood of the car.  At first I thought it was the remnants of a parking ticket that had gone unnoticed, but upon further inspection, I recognized it as the ticket they had stuck there when we dropped our car off at the valet at the hospital a week ago. I thought about throwing it away, but I cannot bring myself to take it out just yet. I decided to leave it just as a reminder of how lucky we truly are, for the rest of right now. 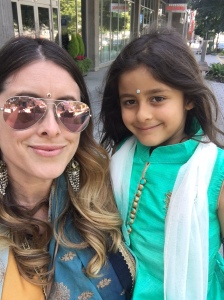 Marissa B. Niranjan is BEYOND grateful for the love and support that has poured out of the rafters for her little girl. From all the cards, calls, texts, stuffies, ice cream, popsicles, care packages, and even her own little personal fan to keep her cool on these hot summer days, her village is the very best. She will be forever indebted to the surgeons’, doctors’, and nurses’ skilled hands and compassionate hearts, and is thankful to everyone who lovingly signed her daughter’s cast (special shout out to the guy who bought Marissa’s mom’s bike off of craigslist and not only signed the cast, but also showed Rubina all of his biking scars and told her the stories that went along with them. “And I’m still riding, everyday,” he said, and she bravely puffed up her brave chest just a little bit more). Another bright spot that came from their time spent in the hospital was that Rubina discovered a love of The Price is Right, and Marissa discovered that her favorite Phyllis is back on The Young and the Restless.