Officially, I signed up to ring the bell in order to fulfill service hours as a member of Student Council, but truth be told, I loved being out there in front of our mall, which boasted on its sign that it was home to ‘Over 30 Stores.’ I was always convinced this included the bathroom because it had one of those tampon vending machines in it.

As I completed my civic duty across from a slush-filled parking lot, I would see my doctor, my dentist, my best friend, and my Spanish teacher. It gave me something to do in a small town while it strengthened my sense of community. Not to mention, it also provided an excellent opportunity to see cute swim team boys who were from a different town just up the valley but would come to our mall to buy holiday gifts, because with its thirty stores, it was the densest shopping area within a hundred mile radius.

Whether people had an extra penny to give or the coveted bills that would need to be folded just right in order to be maneuvered into the slot, each time someone approached to contribute, it felt like such a victory. There was something deeply satisfying about hearing the change clank on the bottom of the tin knowing it was going to a good cause. When someone would start to walk past me without donating, I would change my jingle in hopes of catching their ear and changing their mind. I always liked to think that my bucket would contain the anonymous gold coin worth thousands that would come up in the news from time to time. Looking back, I suppose this was one of my first brushes with fundraising.

In the city, however, the bell allures passersby who more often than not are strangers, so I always make a point to drop in a few coins out of solidarity. It is a good excuse to smile and exchange some holiday cheer. Bell ringers always seem to be so jolly, and I appreciate that. I could never bring myself to wear the provided communal Santa hat. I am all about the festive spirit, but not when there was the possibility of seeing cute boys and I had curled my hair prior to my hour-long shift.

Shelves may fill with snowmen and wreaths before October 31st, and chestnuts may start roasting on an open fire across the radio waves before Thanksgiving, but it’s when I hear the first ding next to a red bucket that I know sleigh bells aren’t far behind.

Marissa B. Niranjan loves Christmas because it’s the one time of year when it is considered acceptable to have a sentimental collection of hodgepodge knickknacks that cannot be deemed as clutter when they are hanging on a tree, documenting our lives and milestones. She also loves waking up and seeing 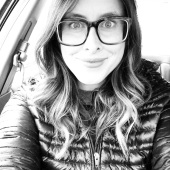 her kids playing in front of said tree in the mornings, just so they can be a little bit closer to the magic.