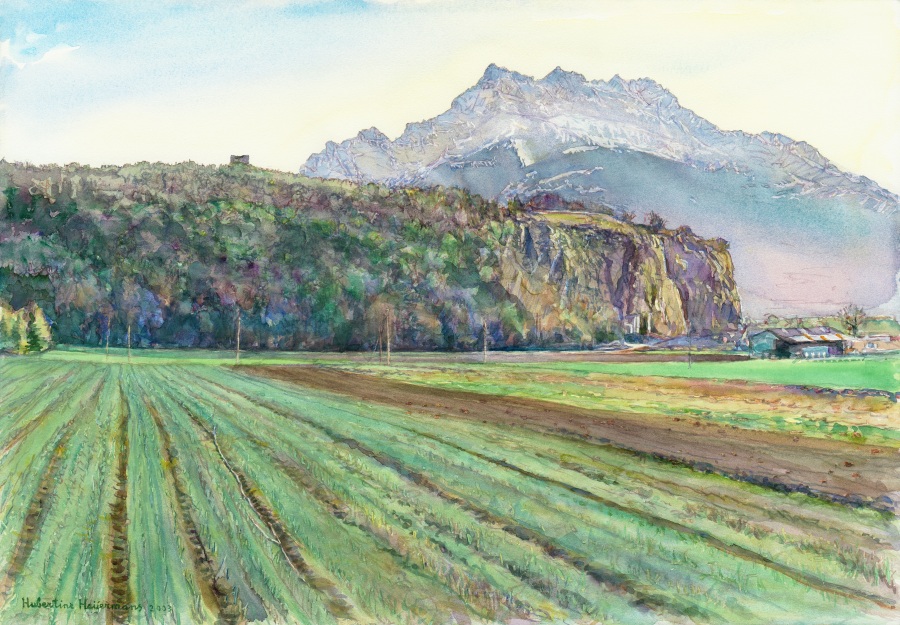 Watercolor by: Hubertine Heijermans A view on the Rhône river valley and the Dents-du-Midi mountains.

When I was twenty-two, I filled a backpack and flew to Switzerland to live in an intentional community.

It’s called L’Abri, which means “The Shelter” in French, and functions outside typical labels—part retreat center, part seminary, and part commune. Despite its name, the main language spoken is English. Its cluster of chalets built onto the side of the Alps overlooks the Swiss Rhone valley, Lake Geneva, and the French Alps beyond.

I went because after college I wanted to travel but didn’t want to wholly leave the academic life. It was pitched to me as an artists’ community, which appealed to me as a fledgling writer with no clue how to write beyond college course assignments. I was scared by the immensity of finding my way in my craft. I didn’t want to do it alone.

I had a room in a chalet that housed dozens of “students” (though there was no curriculum or accreditation). We spent our mornings either in independent study or laboring somewhere on the property to keep the place running. This could be preparing lunch, raking leaves, cataloging lecture cassettes, or cleaning toilets. At lunch we ate in one of the workers’ homes—people who lived there year-round and tutored students individually. Someone would pose a theological question and the group would discuss it for the next hour. After lunch, studiers and laborers changed places. Breakfast and dinners were informal back in the student chalet dining room. Evenings were spent playing cards or viewing an art film, listening to an impromptu concert in the chapel or walking down to the pub in the village to have a pint. Sunday afternoons and Thursdays were completely open for students to travel.

I lived there for four months. I remember bundling up in my down comforter to watch the sun rise over the Dents du Midi peaks and write “morning pages” for my first go at The Artist’s Way. I remember lying in the tall grass on the hillside listening to the village church bells float up on the wind. It was before iPhones and I had lost my watch, but the bells became my clock while I was there. I remember trekking miles down the mountain with other students and emerging from a forest into vineyards surrounding an honest-to-god castle, fully intact and turreted. I remember reading Fellowship of the Ring aloud with my roommate one entire winter afternoon. I remember a chocolate-sampling Freaky-Friday-identity-swap costume party that was equally hilarious and delicious. I remember sitting by the fire at one of the worker’s houses on a Sunday night while he read aloud to us from Douglas Coupland’s Life After God while we had pie and coffee.

The actual castle: Chateau d’Aigle outside of Ollon, Switzerland.

This all felt incredibly normal to me. Well, not the castle. But the community did. When I was very young, my dad was a pastor and there were always people and music and big meals in our home. After that my parents became professors and I grew up on college campuses. Most of my favorite people were between 18 and 22, and my catalog of stupid human tricks was awe-inspiring. Summer camp—the closest thing to living in a college dorm—became the highlight of my year. I went on to work at summer camps for most of my young adulthood. Moving into my college dorm room was like finally arriving at the fabled family manor house.

Sometimes I don’t even realize how autonomous my life is now compared to my youth. Over the last 15 years, I went from sleeping in a bunk-bed in a building full of peers and having someone to talk to at any hour of the day (and loving it) to living in a single-family home with a constant craving for alone time. But then it hits me how much I suffer for that independence. How the weight of my unshared responsibilities can feel immense. How insular my life, and my children’s lives, can become if I don’t actively seek to connect.

It’s not just that I’ve grown out of my youthful social capacity. The culture of my youth involved eight-year-old biker gangs and neighbor kids knocking on the door to ask me to play kick the can until it was too dark outside to see. We don’t have that anymore. The cliche of asking a neighbor for a cup of sugar has become an anomaly. And for parents, the responsibility of raising, teaching, entertaining, and engaging our kids has largely fallen to us when it used to involve the community. Why must we sign up for camps and organize play dates and everything be so adult-led? The way I remember it, everything I did as a child was self-directed and the only obstacle was getting my parents’ permission.

It’s not just parents. The elderly, the disabled, singles, immigrants, transplants. We suffer for lack of connection. For the loads not shared, the company not enjoyed. It may be tired by now, but I actually really like the tender vulnerability implied in the phrase “reaching out.”  Like we’re acknowledging that we’re somehow rescuing each other by asking for help.

A lot of this has to do with the pace of our lives. The text replaces coffee on the couch with a friend because it’s expedient. The Facebook status comment is faster than stopping to chat in a busy grocery store or simply going on a walk in our own neighborhood. So we have a thousand micro relationships and no one really knows us.

Short of actually buying a farm and starting a commune, there have to be ways to have vibrant interconnectedness with other people. I’ve been thinking maybe the answer is just open spaces and rest. I’ve been captivated by Shabbat, the ancient Jewish observance of sabbath. I’m not Jewish, but I had the privilege of attending several Shabbats in the home of a family friend as a child. On Friday nights, the candles are lit at a certain time, a prayer is said, a song is sung, and a meal is shared together. It’s conversation and good food and maybe some stories or music or games. The retreat from electricity is like this physical barrier that says that what matters most can only be generated from the heart and mind with the people in this room.

We are thinking of starting a version of Shabbat in our home. A set time, an invitation to an intimate group, a ban on electronic devices, a big meal, and a commitment to each other to come back again and again to that space. I want to read aloud by the fire, make music, tell stories. I think a part of me is trying to get back to that L’Abri worker’s living room on that Sunday night. Why shouldn’t it be my living room?

If we long for something, something we know is good, and if no one else is offering it, then I think we have to make it. I’ve been privileged to enjoy the academic, spiritual, and civic communities made by others. Maybe it’s time to use all that personal agency I’ve gained to make my own. I can’t buy a farm, but I can turn off my phone and invite some other families to share a meal with mine.

I can reach out, acknowledging that what I’m asking for is to be rescued from my isolation. And I can offer to help rescue others from theirs. 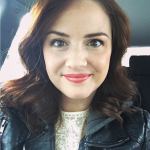 J.M. RODDY is a freelance and fiction writer, a high school teacher, a mother of two, and a pursuer of whole-hearted living.