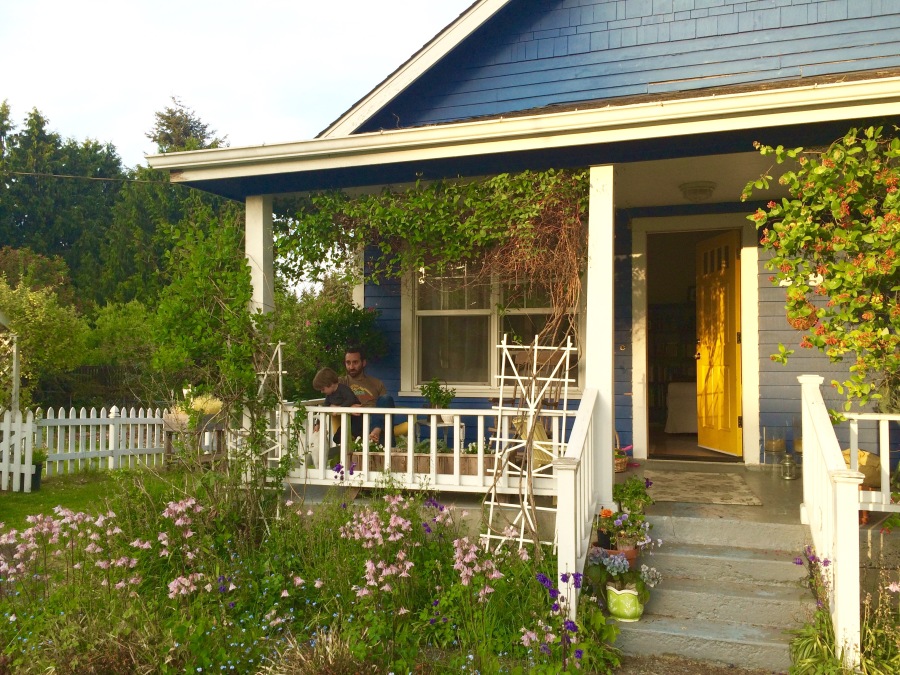 When my husband Matt and I first bought this hundred-year-old farmhouse, we were astounded by the gift of it. In this seaside town north of Seattle, townhouses with postage stamp footprints are being built down the street in both directions, but this old homestead parceled off its farmland to suburban expansion and stopped with a third of an acre left. It brims with a century of cultivated plant life, like ten foot tall lilacs, hundreds of tulip bulbs, old fruit trees, and perennial flowers that come up like clockwork miracles with no help (and in spite of inadvertent hinderance) from me. 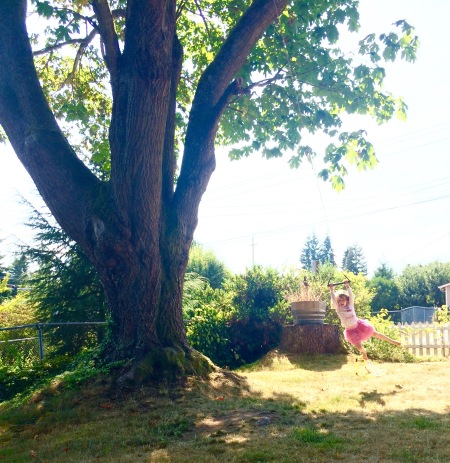 We have a massive maple tree on the south side of our property that the arborist called “a specimen” and might be as old as the house. It spews giant five pronged leaves all over the neighborhood every autumn. (We apologize whenever possible.) It wasn’t long after moving here that we christened this place Mapleside after this dominating feature. I like to think of it as the heart of this property, an old soul keeping watch over us, bearing witness to time and change and our lives.

The day we moved in, Bridget prowled the yard with her sketchbook, taking stock of everything growing–it was mid-March, so only a fraction of what we’d see by June. But she knew mountains more than me, a total neophyte to gardening. Before owning a home, somehow I’d never wondered at the names of trees, or shrubs. This all seemed vital now. The day we got the keys, I called a nursery to price lilacs because this was the plant I had to have. It was nostalgia, mainly; my childhood home had a lilac hedge bordering our property at least twice as tall as I was. But Bridget came back to report that we had several of the biggest lilacs she’d ever seen in the backyard by the shed. Of course, I’d seen them. I just had no idea what they were, dormant and leafless.

That first week, I found myself marveling. I would touch things as I passed them, trying to take them up with my eyes, my mind, my heart. To hold them somehow so that the idea of possession should become comprehensible. This sink, this counter, this holly tree, this fir wood floor, this grey wall, this Green Gables porch, this clematis in its imperceptible, unrelenting climb up the lattice: mine.

Mine? How could a person ever own such things? To own a single plant is the equivalent of owning the very making force of the universe. Stewardship: a word to describe being entrusted with something–a thing handed down, a thing bigger than the scope or length of one human life–was a word that resonated. Someone else built this place with wood, brick and concrete. Someone else planted those lilacs. And the mammoth fir and hemlock and maple? Were they here before those homesteaders came to clear and till this land a hundred years ago? How could anyone own time itself, embodied in the land and the buildings? I may as well own the air inside the walls; at least that I take into my own body while everything else remains external. 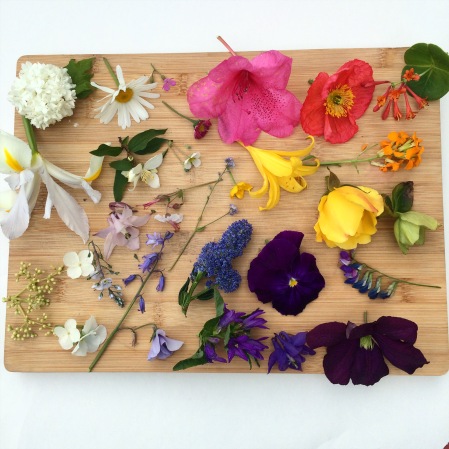 That spring and summer we watched a slow-motion fireworks show in the garden as flowers emerged from the earth and unfurled themselves for us. We learned what color the rhododendrons were (pink), and that after the bluebells and tulips were just subsiding, the columbine then rose out of the flower beds like fairy magic. There were early apples and raspberries and rhubarb and cherries, and there were daisies and mums and pale pink peonies and far too many crocosmia for my taste. I remember with what delight I discovered the climbing rose intertwined with the honeysuckle on the front porch when it bloomed bright yellow with a fragrance like sugared lemons. We learned too, that the beautiful plum tree, perfect for climbing, was elderly and in its last years. We cut it down the next year.

I learned of the tenacity of plant life in all these perennials and reseeders that came up from the ground without any tending by me. It put me in mind of biblical language; this from Joshua: “So I gave you a land on which you did not toil and cities you did not build; and you live in them and eat from vineyards and olive groves that you did not plant.” Someone else did all this and I was grateful beyond reckoning.

But I was also at a total loss how to maintain it. And I learned the tenacity of plant life also in the proliferation of grass in the flower beds, thanks to renters before us who painted the bathroom black and let the backyard grow waist-high. I learned how hard blackberries are to uproot, and that maple seeds put down a taproot you can burn your hands on trying to pull out, and the hawthorns are even worse. I did my best that first summer to weed out the worst, but with two little ones underfoot, there were whole flower beds untouched and well on their way to wild.

We’ve been here three years now, and I’m still not a gardener. I’m not sure I even want to be one, except I want all its benefits. We planted the vegetable garden in the wrong place and had to move it. Then we had zucchini and green beans out our ears, but the squash wouldn’t grow. I learned the hard way what slugs do to new sprouts. There are still wild corners of the yard. And I’ve planted poppies from seed the last two years with not a single sprout to speak of. I’ve always been able to study my way out of problems, but it seems that gardening is a way of orienting oneself to the world, not a program to be followed. Not a feat easily hurdled with a book or a google search.

One wild corner of the yard I took to calling “the thicket” and after being attacked by ground wasps weeding there, I decided we should just hack the whole thing to the ground. And then I didn’t get around to it. And then, one day: a miracle. I looked up and the wild shrubs had shoots taller than me, and–wonder of wonders–plump green fruits were hanging from them. I pulled one down and it had that unmistakable frosty coating that you find on plums, and the fruit was as sweet as the Italian prunes I buy at the farmer’s market. They turned out to be wild green plum trees and this week Matt pruned them so that they’ll grow properly and produce more fruit. 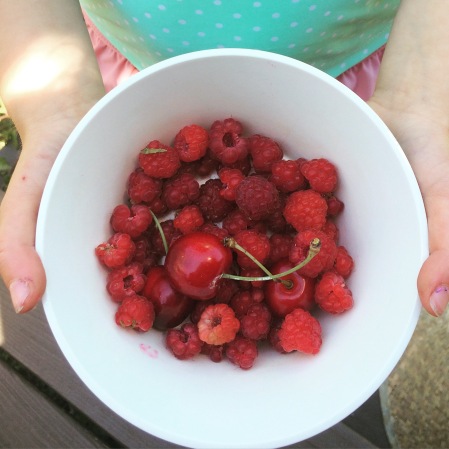 The garden is indifferent to me, in so many ways, going about its business of growing and dying and resurrecting while I make tiny adjustments to the course of its flow. I’ve not learned to be its master yet. I may never learn. But this spring I’ll go back out and try again. And fail sometimes, and maybe not see poppies this year either. But I’ll also pick peonies for a bouquet. And let the juice of wild plums run sticky down my chin.