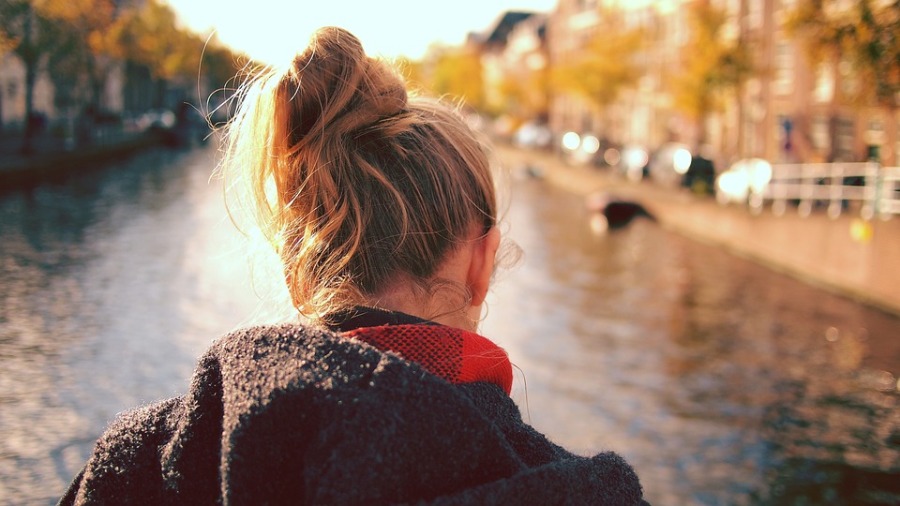 You won’t understand unless you’ve been through it, in it, under it. Dunk then emerge. Half and then whole.

At six years old I had my first swimming lesson. The lakes in Minnesota, though dark and cold and rocky on the outset, are not frightening or foreboding. They are still. Drop a pebble in from the edge of the old dock and watch the ripples follow all the way to the webbed toes of napping geese. Like Mab’s minions, the fairies dance from your gangplank boardwalk widening their scope until they awaken the birds they tease. Those sleeping geese ignore the plea for playful banter and sleep on until they turn and alight like ten-pins in a V in the sky heading south to warmer weather.

“See, the birds can swim and fly. Swimming can’t be all that hard.” Her logic seemed sound to the small herd of six-year-olds.

I, the oldest of three, was the first to take swimming lessons. My brother, age four, was content in water wings and my sister newly born would later jump in like a fish and waddle her little bottom contentedly. The future unknown, I had this almost overwhelming sense, even then, that I had to be the first to be brave, first to try things and experience life and make mistakes so that they would in turn learn to be brave. If I could, they could too. So, driven by duty and sibling loyalty, I stepped into the cold lake. Toe in, knees, hips, back to knees, down to waist, elbows, shoulders. In.

My teacher Karen wore a red one-piece and a too tight swimming cap that sharpened her already harsh lines making her nearly unapproachable. She obviously didn’t swim for pleasure. She must have glided, cut through water. Her helper’s name was Steven, and he was skinny with strong forearms and pop-out veins. Karen’s best quality was that she never laughed at us. She knew she was saving lives by teaching us to swim alone. Karen would link under our arms and swish us through the cold making waves from side to side then slide us over to Steven who taught us how to “be a starfish,” to float with our heads back, ears underwater, back arched, arms outstretched. He’d hold us and then let us go, his changing voice ever deeper and more God-like from under the water. I felt empowered there, holding my own, afloat and praying, staring up at a pale blue cloudless sky. 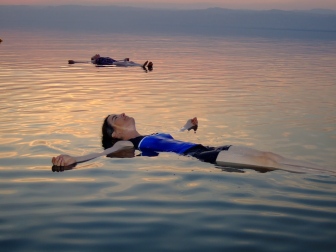 How wide the sky when you see it like that. Like laying on a flat mountaintop in Montana, you see the curve of the earth and feel both small and huge in the same moment. Your actions don’t change the axis of the planet, but they matter to those around you. They count for survival.

Perhaps some miss the sky and the float and God’s voice from underwater amidst the great splashings and yellings and needing and now. Perhaps it’s a risk for any of us just to toe into whatever water and see what comes let alone getting in past that waist-high place. I’ve never really been one to jump in and see. I’ve calculated all from depth to windchill factor and the distance from towel to home after. Perhaps we all fear the deep somehow. That same caution can maintain shallow relationships. Fear freezes us up. We can’t swim well if we fear and can’t put our faces in, can’t relax and surrender in a starfish approach to life. Fear could drag us under.

I held my breath for a moment suspended in back float. Then fear seized my little body. I tucked fast, my arms and legs curling in and water covering over me. I yelled but dropped still further down until my toes reached bottom and Steven’s arm was under me. Angry at the world, I clung to the strangers with tight caps and pop-out veins. I coughed the lake I’d swallowed out.

I can’t go back in. I wasn’t made for this. Not alone. Not there. Why can’t one float and tuck? Why must float require surrender? Arms and legs outstretched. I am a starfish. “Don’t let go!” I screamed to the helper. “Don’t let me go!”

“I won’t, but you have to try again. I’ve got you.” His voice, soft and tender, continued to speak as my ears sunk under and all was quiet but for fairy rushes and axis spinning. I tested his grip by tucking a few times. True to his word he didn’t let me go.

I learned to breathe, to float and listen to my own lungs filling and releasing. I glanced to shore at one point and saw my brother watching in water wings. He had seen me tuck and cough and go in again. He saw me do it so he knew it was going to be okay.

In the right position, they say you can back float forever.

One year ago I moved into my own place. Comfy chair in the kitchen, spoons where I want them. It’s glorious. I always had roommates, from birth I think. Siblings count and so does college, then years upon years of rentals with roomies. It can be great. Eventually you stop watching out the window for your life to find you, that sanity is not in the restless waiting but in the daring to move forward. You need sanctuary, to settle the voices in your head, to cook and not feel guilty for messes and noise. A place for your thoughts to go. A place to grow and create. As Cisneros puts it, “A place of my own, clean as paper before the poem.” So I found it. A basement apartment, which on first glance looked cold and dark. I stuck a toe in and watched the ripples of light take over each of the spaces in that place.

I lay back in it on that first night looking at the new ceiling and held my breath for a moment.

Asprawl in that space, I listened to my own lungs fill and release. “Lord, you’ve got me.”

It’s going to be fine.

Stephanie Platter is a teacher, writer, film critic, and coffee lover who feels that no space is complete without a splash of red.