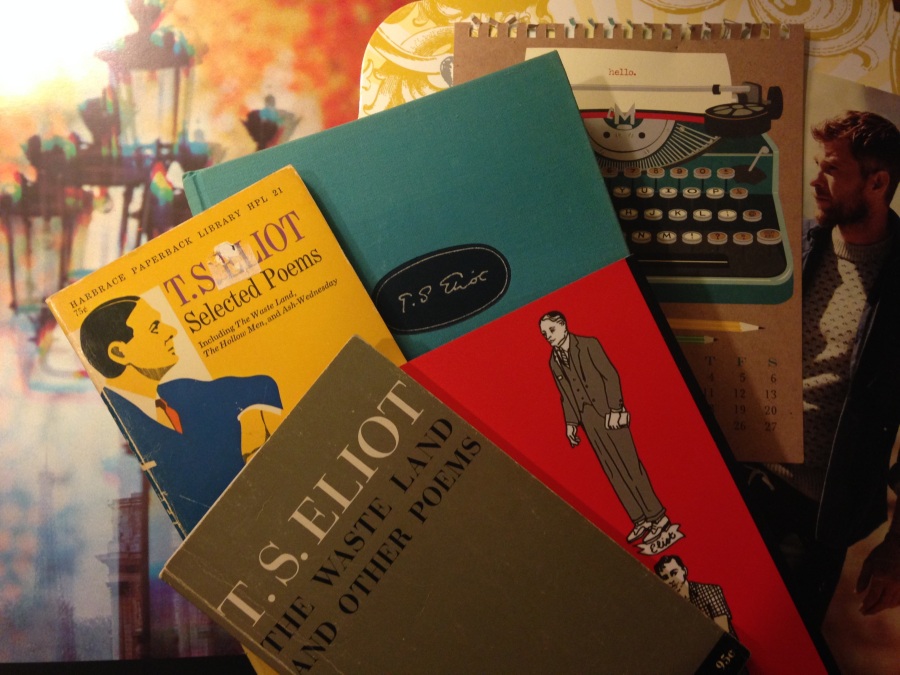 I have a crush on Prufrock.

T.S. Eliot’s character. I have no idea why his poem is called a love song. It’s not about love. It screams Odysseus lost at sea waiting to be torn from the mast by his own longings.

I don’t know why I like him. He’s moody, older, scuffed and stumbling. But he’s literary and verbose, unapologetically bright. He’s introspective. He’s unsettled by the ability of partygoers to make that too small talk that manipulates and stupefies slowly and more bitterly over time, like a too done stew on the stove. We roast one another so, and to what end?

He is a little distant. Angsty, but forgivable since he speaks a little Italian. Flirtatious at first then a little too critical. He cares. He cares about his looks, his deteriorating hairline. His rolled up trousers wishing more youthful legs would fill and use them. He dabbles in unfulfilled dreaming, in forgone conversations over odd oysters and steaming cups of coffee re-stirred.

He counts his days, feeling the end of story closer than the beginning. A pessimist to the core. But I still love him. I love that he is real with me.

I love his question, “Do I dare eat a peach?”

He asks me along, rather boldly, more like he tells me, “We must go then, you and I.” I the “you,” and he the “I.” “When the evening is pressed against the sky…”

“We must go and prepare a face to meet the faces that we meet.”

We all do this. We prepare faces to meet the people we’ll meet. We let our guards up and down, more up than down. We wear the masks that match the moments. We hold our own until we can’t hold it in. We suck it up and strive and smile. We stay that way and stay a while. Mask on. Stand strong. 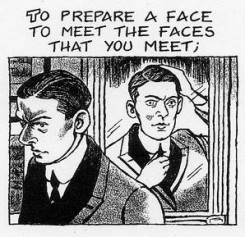 And yet. It’s his vulnerability that I love the most. I who know him without the mask. He’s the masked phantom singing at the Opera Garnier. To me, he’s the do-gooder bandit throwing bats in a cape. He’s the one with the smile who has had a long day. I know him well enough, I think. I guess because I wear a mask too, I can relate.

J. Alfred Prufrock. I always wanted to know his back story. So I gave him one. His lives and loves. His time in Paris. His days at sea during the war. I needed to know him, so I wrote him.

I wrote a song for Prufrock. I sang it all day long. A novel, now a post-it. It’s the story of his past. I gave him my grandpa’s war stories. I went to all of his old haunts. And now I want to help him see the world afresh and newly. New eyes that seek joy honestly. I care that he’s unhappy, and the last thing I would want is to lose him to the sirens.

Here is a Link to The Love Song of J. Alfred Prufrock:

Let us call this essay an introduction. Coming soon: a novel by this author entitled “Prufrock on Fire.” Editors, Agents, Publishers: inquire here.