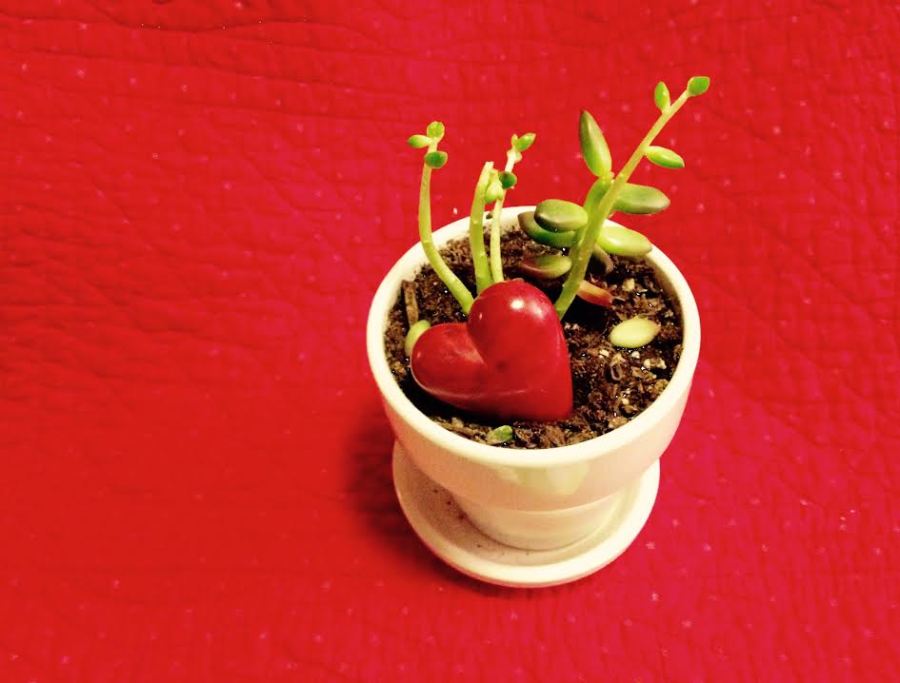 It bends within its cage

Be careful with that

It’s an emblem, you see

Once broken it takes quite an army

To push on the sand till it’s swallowed by clams

And pearlized by their tongues in their sleep.

That was that. It was spoken. “Everyone says that you’re are a very nice person. And everybody can’t be wrong. I just don’t think I’m ready to date right now.”

He wasn’t interested. So why did I feel plagued with heart shrinkage? It was dissolving inside my chest cavity. I knew it. But I couldn’t prove it.

The coffee pot in the teachers lounge was empty the next morning. Every time I went to there for a refill—out. Blast me for missing the stupid “coffee maker training” sesh that using this machine required. I remember telling Judy, “Oh, I really wish I could be there, but I have a thing…” I had said it into the air at lunch there in the lounge. Surely it was enough to get out of a dull training session. And I’m sure there was a real thing. I think it was a haircut. Or a trim. Or I washed it. Or I thought about it.

I had five minutes. This one shot to make it work. What would Eminem do at this moment? I knew that he would at least give it a shot. And I was desperate for coffee. The pun wasn’t lost on me as I stood snickering at my own joke: one shot…of espresso. It felt good to be so in charge of my own destiny. I was worth something—worthy of someone. Worth his time and energy. Worth his ability to play the guitar and smile at the same time. Worthy of some man’s friendship and someday someone’s love. I would take this shot and own it.

I removed the lightning flash filter ring and replaced it with one above the counter in the cupboard marked “coffee.” For a coffee cupboard, there sure were a lot of tea bags and hot cider packets. A few random hot cocoa bags also dotted the shelf. One had been opened and the friendly half that someone thought to share had dumped out onto the ledge. Cocoa for days.

I pushed the adjacent grinder “once to fill.”

The sound it made when it filled reminded me of the ice machine at the wedding at that cool industrial place in SoDo where I first met him. You know the one. It’s over by the stadiums downtown. It is a great idea, after all, to meet at weddings they say. I thought I’d stop breathing when he got there. His hair looked redder in real life.

The offering from the coffee grinder looked small, kind of pathetic for an industrial sized machine. So, I pushed it again.

No, it’s Stephanie. Yeah, it’s nice to meet you too. And your name was? Oh, yeah…so you’ve been traveling? I’d love to hear more about that sometime. Are you glad to be back? What did you miss most? I’m surprised! Most people hate the rain. Well, if beer can make Milwaukee famous, it must be rain for Seattle.

The smallest of small talk.

Nothing reading on the coffee pot.

Let’s see, you missed the closing of the aqueduct and the building of the giant ferris wheel on the water. It’s great! Expensive, and great. And you said you are working…oh, oh I’m sorry. Yeah, get back to your group. They are so great. Nice taking to you. Let’s not be strangers.

It was Marian who told me to email him. No, she dared me, told me to “grow a pair.” Then she composed it. But I pushed send.

Inbox. Nothing. A week. Then, miracle of my dreams, of chick-flick concoctions of fall-in-love schemes: You’ve got mail.

That Meg Ryan—I used to emulate her sort of, until she got that crazy facelift and duck smile. She didn’t need it. She was beautiful. She had it all and Tom Hanks, too. She was all those things I knew I couldn’t be. She was what all guys wanted, right? The very definition of lovable. Skinny. Quirky. Affectionate. Un-opinionated.

I checked my inbox the next day. One message worth opening, but I couldn’t do it. Yes, I could.

I watched as the black sludge oozed its way out of the machine for a whole ten minutes. Then in one burst of final energy, a blonde mass of scented water.

This was not the plan. I couldn’t understand why he’d written both niceties and a total slam. I’m nice?

But he’s not ready to date anyone. I’d asked if we could get coffee, not take the Seinorama tour before bed.

The strange rush of failure and rejection mingled with my need for caffeine. The one consolation rattling inside me with my now marble-sized heart was that I’d survived my greatest fear: total rejection. Survival was something, I guess.

“No worse off than you were before…plenty of fish in the sea.” Thanks, mom.

But still no coffee. The lies burn so.

I decided to leave work at lunch time.

“Welcome to Starbucks. Can I take your order please?”

The added pressure of having a perky person ask you to define yourself publicly would make anyone take more meds. You have to know yourself to order coffee, and you have to be prepared to be summed up as a person by your next few words. I know because an old roommate of mine worked at one of these places and had an incredibly accurate “duke to douche” factor based on what men ordered. She was asked out as a barista. A lot. She kinda looked like Meg Ryan. Pre-facelift.

The struggle was real and only increased when I glanced at the pre-caffeinated herd growing more leery and ape-like in the line behind me as I pondered.

I was about to resort to drip coffee. Or to just say forget it. Or vanilla latte when the barista leaned toward me and whispered, “Order anything. Order big. It’s been taken care of by a man a few people ahead of you in line.”

A small scrap of receipt. Scribbled on. “Hi, you are lovely. I hope this coffee helps you smile today.”

Marble mushroom cloud under my rib cage. Survival is key, they say. Smile, I did, all day. Turns out hearts do grow back.