I was early on my first day of high school. My parents couldn’t drive me and the school district decided buses didn’t make sense when most of the students could drive themselves, so I took public transit. The city bus timetable got me to school forty minutes early. It was either that or twenty minutes late.

An overachiever, and a little nervous, I decided to spend the time looking for my new classes. The building seemed like it had been made for giants, its empty halls cavernous. It was new and awesome and terrifying.

Junior high had been hell. Bullying was the culture and one boy made me his target. He rode my bus and regularly mocked me, yelled at me, and called me a slut, fat, and ugly while the other kids laughed. Once he pushed me into a lake. Many days I would arrive home in tears. One boy who rode our bus was popular, athletic, and handsome, and though he never stood up to my tormentor, I remember his hand reaching over the top of the vinyl bus seat and patting me gently on the head as I wept.

I had friends, but only the deified popular kids were spared from mockery. A brainy theater kid incapable of retaliatory cruelty, I was more of a target than the rest. Somehow I never got the memo that the way you survive junior high is by not drawing attention to yourself. And I got it a lot worse because my tormentor especially singled me out. The nastiest kids even targeted the special ed. students. My tormentor used to pretend to be in love with one special ed. girl, hamming it up and trying to put his arm around her while she blushed and everyone laughed at how uncomfortable he made her.

School was infernal, but I thrived in my church youth group. I “went out” with a boy from church camp. He was the spitting image of a young Keanu Reeves. We drifted apart and then rekindled a friendship about a year later. I decided I was in love with him and hung all my young romantic dreams on his shoulders, memorizing lines to rom-coms and imagining him saying them to me. After talking on the phone for weeks, we made plans to meet up at a local mall, and I brought a friend with me as my wingwoman. Young Keanu and wingwoman started “going out” within a week. I cried for months. I still called him occasionally, until one day he tried to get me to talk about sexual things while he put me on speakerphone for his friends to listen. I realized what he was doing and hung up. I’m ashamed to say I still mailed him a manila envelope of love letters months later. He never replied.

At school, one day my tormentor went too far. He came by my locker while I stood there getting my books. He and his friends had a habit of slamming locker doors, forcing their owners to enter the combination again. It was irritating, especially when you were running late, but it was harmless. This time, I was gripping the edge of my locker to prevent the unwelcome slam from happening. Whether he didn’t see my hand there, or didn’t care, I’ll never know. He slammed the locker anyway.

It wasn’t serious—nothing broken—, but I was hurt badly enough that I had to be taken to the office, and it got the principal involved. My parents took the situation seriously for the first time and offered me options. My dad had been teaching at a tiny private school twenty minutes away and I decided to spend the second half of the year there. At my new school, I was liked and welcomed. For the first time I felt like being myself was allowed.

But the new school was legalistic and my academic ambitions felt stifled there. So the next school year, I went back to public school. Junior high was over, and it meant starting at the high school, which was twice as big as my former junior high. I hoped that meant I could blend in a little better.

With my little pink and green printed schedule in my hand, I wandered the empty halls of this massive new school, locating my new classes. I turned a corner and saw a face I’d thought of countless times, but had not expected to see at that moment in the empty high school on my first day back.

It was young Keanu.

He saw me and raised his eyebrows so high they nearly disappeared into his hairline. I looked at him, looked away, and kept walking. Right past him.

I don’t know when I learned that my tormentor had moved away, but I eventually realized that he wasn’t there. The school was big and there were lots of new faces. Friendly faces, mostly. The rest were at least indifferent, which was a massive improvement to junior high.

At lunch, I started sitting with kids I met in my new classes. They never became my tribe, but there was one girl, Vicky, who made me laugh. She was sassy and smart and had bright blue eyes. Turned out she was a theater kid too. As the semesters went by, we always seemed to have the same lunch time, and we became for each other a safe place to land in the uncertain social sea.

My senior year I managed the student store with the same sweet popular boy who had comforted me on the bus those years before. By then I was in student leadership, getting leading roles in the school plays, had a really kind-hearted boyfriend and a tight clique of like-minded friends. I felt loved. I felt released into my own muchness. One day while we were baking frozen discs into warm Otis Spunkmeyer cookies and stocking Tim’s Cascade potato chips, he turned to me and said, “You know, you’re actually really cool.” I said “Thanks,” but what I was thinking was: You only just now figured that out? Your loss. 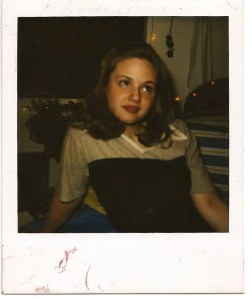 J.M. Roddy, pictured above at age 15, is a freelance writer, a children’s author, and a pursuer of whole-hearted living. This week she returns to high school as an English teacher where she hopes her students can discover their own muchness.